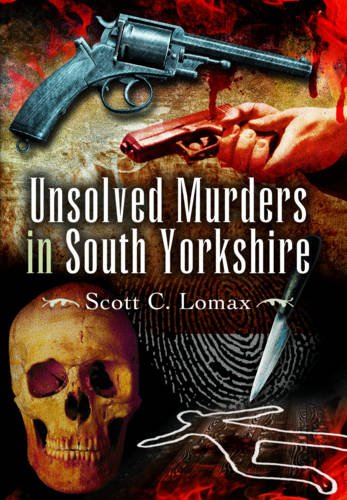 TTCE has just finished reading the second book in his collection by author Scott C Lomax, and has decided to review it for the latest TTCE blog book review. Firstly, some bio about Scott. The blurb on the back of the book describes 34 year old Scott as being a feature writer on the subject of true crime for the past 16 years. He is already a successful published author and activist, releasing books on the subjects of high profile murder cases such as the Jill Dando murder, and the infamous White House Farm murders of 1985. Concerning the Dando murder, he was a leading campaigner for the release of wrongfully convicted Barry George. Being a lifelong Derbyshire resident, Scott has authored two previous books concerning unsolved murders around that area, both of which TTCE has read, and which will be reviewed for The True Crime Enthusiast at a future date.

So, Unsolved Murders In South Yorkshire is a pretty self- explanatory title. Having previously read Scott’s books on unsolved murders, I had good expectations from this one. It did not disappoint. Scott has taken 10 cases of unsolved murder from around the county, the majority of which are unfamiliar cases, ranging from the mid nineteenth century to the latter years of the twentieth century. Although a relatively short book in pagination (146pp), the amount of detail more than makes up for this, and TTCE is sure that any reader would be left satisfied. Scott has discovered, analysed and chronicled some truly fascinating cases, and the amount of research that has gone into each individual case is remarkable. In the majority of these, the research must have been very time consuming and painstaking – but this just serves to highlight Scott’s passion for what he writes about.

The reader of Unsolved Murders In South Yorkshire will learn of obscure unsolved cases such as the Victorian shooting of George Firth in 1851, and the mysterious death of draper Florence Hargreaves in 1926. There are also presented two unsolved murders from the 1960’s; those of Lily Stephenson in 1962 and Anne Dunwell in 1964, and several cases from the mid 1970’s to early 1980’s. Each case is presented in a chronicological and logical order, with the amount of detail described in each case extremely impresive. In TTCE’s view, this was a massive selling point for me on this book. It is always enjoyable learning about a new case, especially unsolved ones where the possibility still exists of an offender being brought to justice many years after the event. It helps if a text is well written, informative and captivating, and personally it is the added detail that makes for this. There isn’t a chapter here that hasn’t been meticulously researched and doesn’t satisfy any of the above criteria. The way each chapter is written leaves the reader of the impression that Scott has gathered this research, down to the finest detail, and then added it into the narrative in its entirety. This impressed TTCE greatly, as i firmly believe you can never have too much detail. Indeed, it is what i strive to express in my own articles.

Another feature i was left impressed with are the photographs provided with each chapter. Where possible, press releases, original location photographs and identikit pictures relating to the case in question have been reproduced. If any have been unable to be added, perhaps unable to be obtained, then the author has added his own photographs of crime scenes. Whilst present day pictures may differ from years gone by, this again is interesting because it at least still gives the reader an image to match the mental picture that the reader gains of locations mentioned throughout the book. This again shows the dedication and passion Scott has to his writing.

TTCE thoroughly recommends Unsolved Murders In South Yorkshire, and recommends a visit to Scott’s own website here: Scott Lomax  He is very personable and will quite happily answer any correspondence, as TTCE can testify to. As always, the reader has to make up their own mind – however, I’m sure the reader will not be disappointed.