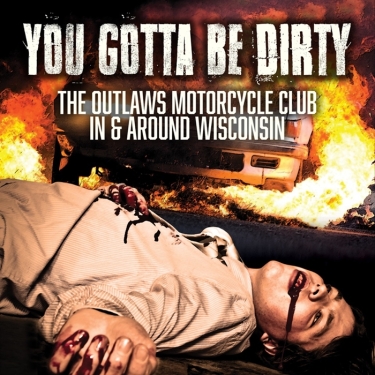 I was sent a copy of this book to review after being in contact with Milwaukee Police Department Homicide Lieutenant (retired) Steve Spingola. Steve is a follower of my blog and put me onto this book, and in contact with the author, Michael Grogan. I was asked if I would like to write a review of the book and, upon agreeing, was very kindly – and promptly – sent one. As anybody who has read my other book reviews on The True Crime Enthusiast will know, I try to be unbiased, honest, fair and constructively critical.

You Gotta Be Dirty: The Outlaws Motorcycle Club In & Around Wisconsin, by Michael Grogan, focuses upon the Outlaws Motorcycle Club that embedded themselves in Milwaukee, Wisconsin, from the mid 1960’s. While motorcycle gangs themselves are not a ready choice of topic I would study, I am however a firm believer that you should open new doors and break new ground constantly. Therefore, I approached the book with an open mind and a determination to write an honest review.

It begins by detailing in the first couple of chapters a chronological and explanatory account of the history and genesis of the motorcycle gang in general, before focusing upon the Outlaws Motorcycle Club (OMC) that appeared in Milwaukee from the mid 1960’s. It goes on to account how the OMC were formed, the various club rules that exist within the world of the motorcycle gang, and how the gang then moved into various antisocial and criminal activities, including gun running, auto theft and various other elements of organised crime. And ultimately, into murder.

Described in sometimes graphic detail in this book are various crimes and murders committed by the OMC in order to intimidate law enforcement officials, people marked as “enemies” and potential witnesses that could possibly help bring successful prosecution to their members. Detailed within the book are accounts the crimes committed by the OMC, including various murders of innocent civilians, murders of OMC member’s wives, various assaults, accounts of disturbances and fights, attacks on the homes of rival gang leaders, sexual assaults and firebombings. Perhaps the most disturbing reading within this book concerns the death in an explosion of 15 year old paperboy Larry Anstett, who was killed when he intercepted a bomb wrapped as a Christmas gift. The bomb had been aimed at the president of a rival gang known as the “Heaven’s Devils”.  The account of Anstett’s death makes harrowing reading, but as with all of the other examples that have been listed here, has been researched meticulously and will undoubtedly capture the reader’s attention.

The book also describes the awareness in which the Milwaukee Police Department (MPD) and other law enforcement agencies began to take of the OMC and the various aforementioned activities, and the efforts to bring various OMC members to justice. A full chronological timeline of all investigations, charges and sentencings are laid here before the reader, and will not disappoint.

I have only written a summary of what the book contains; it would defeat the purpose if any review was to give away the entire content. After reading the book, I was left very, very impressed. As mentioned at the start, the world of the motorcycle gang is not a subject I would readily choose as my genre of reading. But I always enjoy anything that has been well written and that effort has gone into. So once I started this book, I was pleasantly surprised that I managed to read it and it kept my attention throughout a busy week at home. Thanks to this book I now have another avenue of true crime I would happily explore. This is a book that deserves to be read, and ultimately I have no doubt will become the canon for a study of its subject matter. Michael Grogan has taken 2 years painstakingly (my god, the detail!) researching the motorcycle gang history and culture (primarily as a graduate student for his thesis) and has expanded further research which has resulted in this book. As I have mentioned in previous reviews, I appreciate detail greatly and this pays off here. It flows as an entertaining and fascinating read, is extraordinarily rich in detail, and is excellently referenced. If I had any criticisms at all, there is only one and it is that the book lacks any photographs. It seems a shame that such a well-researched book does not have any visual evidence to correlate with – for example I’m sure I am not alone by thinking it is always nice to put a face to a name! That aside, the book deserves to do well in publication due to the hard work and effort that has clearly gone into creating it. I sincerely hope it does, and I hope this to be the first of many books from Michael.

I would have to pass credit to Steve Spingola for being the conduit in which I had the opportunity to read such a fascinating book, without him it would have very unlikely came to my attention. Steve can be reached via Twitter @MilwSpinny or The Spingola Group – he is a fascinating man and is very approachable. The books author, Michael Grogan, is also very approachable and has been easy and gratifying to correspond with. He is prompt to respond to any correspondence and can be reached for any questions an interested party may have, via Twitter @PredicateActs.  I would like to pass my thanks to both for granting me such a unique and rewarding opportunity.

5 thoughts on “Book Review – YOU GOTTA BE DIRTY: THE OUTLAWS MOTORCYCLE CLUB IN & AROUND WISCONSIN” Leave a comment ›

Leave a Reply to ScottCancel Reply

Book Review – YOU GOTTA BE DIRTY: THE OUTLAWS MOTORCYCLE CLUB IN & AROUND WISCONSIN
Loading Comments...